Results after 3 weeks of radiation therapy 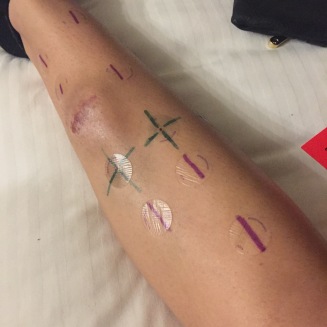 one week after radiation therapy. Very painful and a lot of burning.

What is Radiation Therapy?

Radiation Therapy uses targeted energy to destroy and/or shrink cancerous cells and tumors.  According to the Cancer Treatment Center of America, Radiation Therapy can be used in multiple ways.  It may be used:

There are three specific types of radiation therapy which include:

Systematic radiation therapy– a radioactive substance (that is swallowed or injected) travels through the blood to locate and destroy cancerous cells.

I was fortunate to not have to undergo chemotherapy, which many relate to having cancer.  For six weeks, every weekday at 7 a.m., I had external beam radiation therapy.  The doctors used markers or stickers to outline the area in which the beam will be used. (pictured above).  These markers/stickers are worn everyday for the time of the radiation therapy.  I can admit that at first going into the huge room and laying on the table underneath the huge radiation machine was overwhelming.  I was worried it would hurt or burn.  To my surprise, the actual radiation exposure did not hurt.  I felt it as much as I would if I were standing in front of the microwave (so no at all).  The after exposure was the part that began to be painful.  After about two weeks of radiation, I began to feel tired and had a red discoloration in the area that was being radiated.  It was very important for me to continuously keep medicated lotion on the area throughout the radiation therapy as well as after.  After the six weeks of treatment, the radiation continued to work.  The discoloration quickly began to look like severe sunburn.  It was warm to the touch and hurt like sunburn.

Every experience with cancer is different as well as the treatment.  I did not suffer from many of the side effects that I was told I could have.  Things such as loss of appetite, hair loss, weight loss, fatigue, and skin irritation were all possibilities.  I believe that because of where my cancer was located I did not suffer from many of these side effects.  While at the cancer treatment center, I was able to meet many people with different cancers and treatment plans.  Many of the patients I met during radiation, who had cancer in various places in their internal organs, suffered a great deal with the side effects of radiation.  Fatigue and loss of appetite seemed to be the most common side effects for many of the patients.   My tumor reacted very well to the treatment.  The cancerous lump on my leg went from the size of a lemon to being almost unnoticeable.  Shrinking by about 4.5 centimeters.  One thing I have learned with cancer is that each person has their own journey.  You can not judge or measure the progress of your journey based on others.  Continue to do your research and always ask questions.